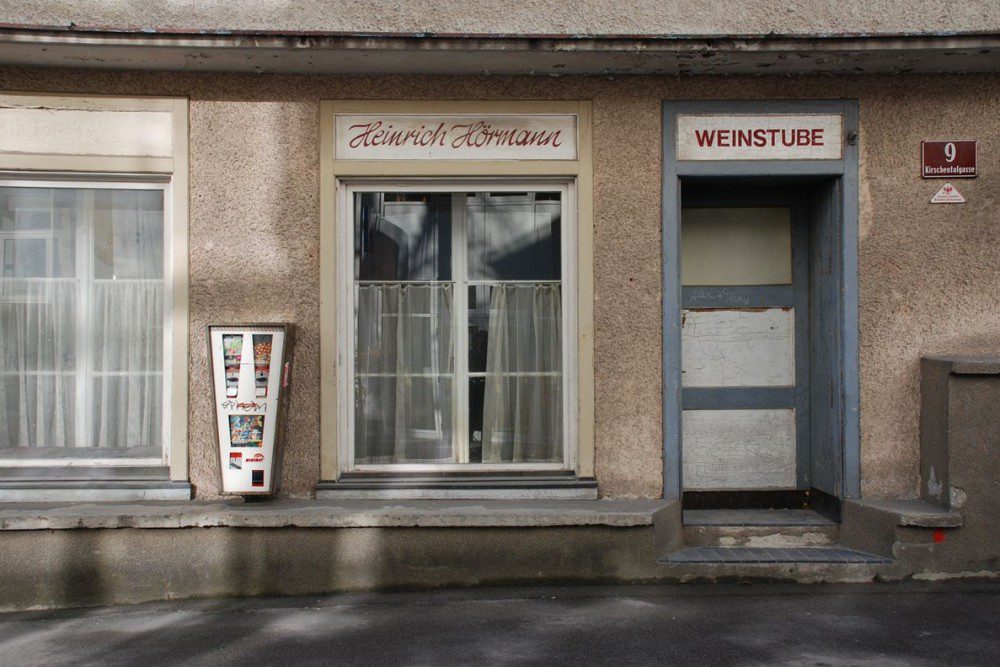 The processing of the protection zones is divided into three sections: In an on-site inspection, an inventory is made and a catalog of criteria is drawn up for evaluation according to architectural and design, urban planning and spatial planning, as well as historical, morphological and topographical issues of the entire area of the respective protection zone, including the immediate surroundings.

In the protocol of the inspection, all considerations and assessments are recorded, the inventory is documented photographically and individual detailed mappings are made according to the above-mentioned questions. Accompanying the on-site inspection and in preparation for it, the basics are worked up with archival surveys and review of historical plan and image material in the Innsbruck City Archives, the Landesmuseum Ferdinandeum, and the archives of the Federal Office for the Protection of Monuments, literary research and processing of secondary literature, review and content classification of the documents available in the Office of Urban Planning.

The final documentation report includes the inventory description and historical processing of the current protection zones with a selected collection of historical illustrations, the detailed catalog of the individual streets with pictorial documentation of the structural inventory, as well as the comprehensive plan appendix corresponding to the formulated questions.
As a central result, the report is preceded by a summary assessment of the existing protection zones with variants for future evaluation and justification.

The three existing protection zones Hötting Dorf, St. Nikolaus and left side of the Inn River are combined into one protection zone with a closed core area and individual peripheral areas. The boundary of the protection zone generally follows the parcel boundaries, runs along existing development and does not divide buildings. On the basis of the inventory and the assessment criteria developed in accordance with the criteria catalog, the following boundaries are proposed for the protection zone: In the Höttinger Au, buildings No. 1-5 are left in the protection zone as a counterpart to the ensemble around the Mariahilfkirche and to control the height development in new planning; the zone boundary is led along the northern edge of the street to the buildings Höttinger Au No. 10, No. 10a and these are enclosed as a western closure and to prevent too large and dense development.

Between Kirschentalgasse and Frau-Hitt-Strasse, the existing zone boundary is left as it is, excluding the house at Schneeburggasse No. 19a and heading west.

The open spaces between Hinterwaldnerstrasse and Daxgasse are not visible, but are important in context and should be preserved to ensure residential quality. At the building Hinterwaldnerstrasse No. 4, the existing zone boundary is adapted to the parcel boundary and extended to the buildings Schiesstandgasse No. 5, Dorfgasse No. 11, Dorfgasse No. 30, Bauerngasse No. 6 and Bildgasse No. 12 as a northern termination. Towards the north, a peripheral area is proposed with a western boundary offset from the existing buildings along the development and a termination with the buildings Dorfstrasse No. 34-38. In this peripheral area, despite the lack of quality of the individual buildings, a characteristic corresponding to the lower section of Dorfgasse can be read. However, the residential buildings Dorfgasse No. 30a-d and No. 32 stand out as out of place in size and design; greening of the sealed surfaces, open space design and removal of the closed fence on the street are proposed.

The northern course of the zone boundary along Bildgasse, Alter Höttinger Pfarrkirche, cemetery and Höhenstrasse up to Riedgasse is maintained. In the Riedgasse, the northern end is slightly corrected up to the house No. 87, the zone boundary is led behind the existing development with a distance corresponding to the development plan. The slope of the terrain above Riedgasse requires special attention as a scenic background to the building stock, but is not considered in the protection zone, since it is protected by legal provisions as open land. The buildings Nageletal No. 1 and No. 2 are villas of high structural quality in a very heterogeneous environment, however, so that the designation of a closed area to be protected does not seem justified; further development and especially slope protection should be restrained in design and materiality.

South of Riedgasse, the course of the zone boundary up to building No. 32a corresponds to the existing situation; it is proposed to exclude this in the future and to enclose the parcels around building No. 38 in order to protect this area of villa-like development from the turn of the century. At Bäckerbühelgasse No. 9a-d, the existing zone boundary is reinstated, and left north of Innstrasse, and east of Höttinger Gasse. The area remaining outside the protection zone between Riedgasse, Innstrasse and Höttinger Gasse is proposed as a perimeter zone, with the exception of the residential buildings Höttinger Gasse No. 10c-e, No. 12c-e and Riedgasse No. 10c-k. The large green areas in the area of the former Upper Bruckfeld should be additionally secured in their quality by corresponding recommendations in the development plan or via legal provisions in the case of dedication as open land, since they are formative in the long-distance effect as a viewing zone behind the left Inn line.

The eastern course of the zone boundary remains with a slight shift to the edge of the development in the area Fallbachgasse No. 10-16. The residential building Kirschentalgasse No. 10-16 remains insularly excluded from the protection zone; the buildings are not visible due to the extreme slope, and densification or elevation would not be permitted.

For developments in the courtyard areas of Mariahilfstrasse and Innstrasse, as well as behind the buildings at the edges of the entire zone, it is recommended to limit building heights and densities, as well as to keep or leave historic plot sizes recognizable. 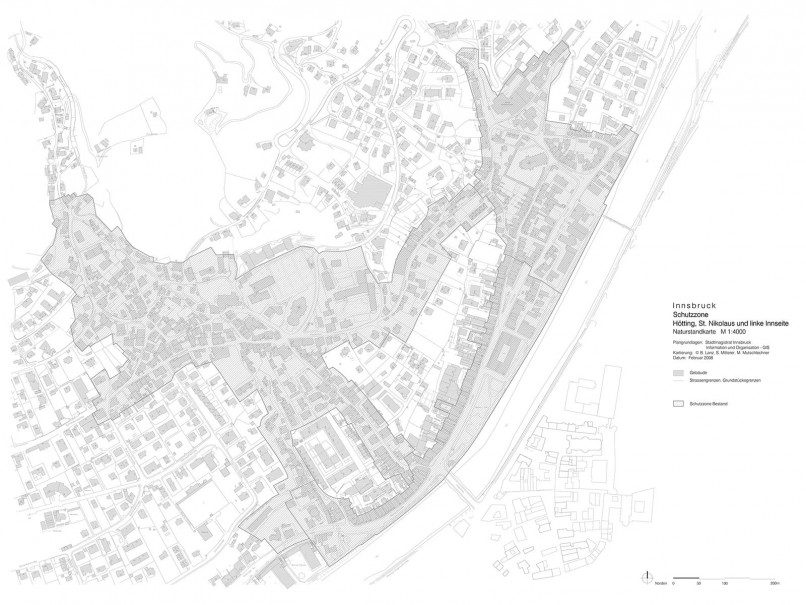 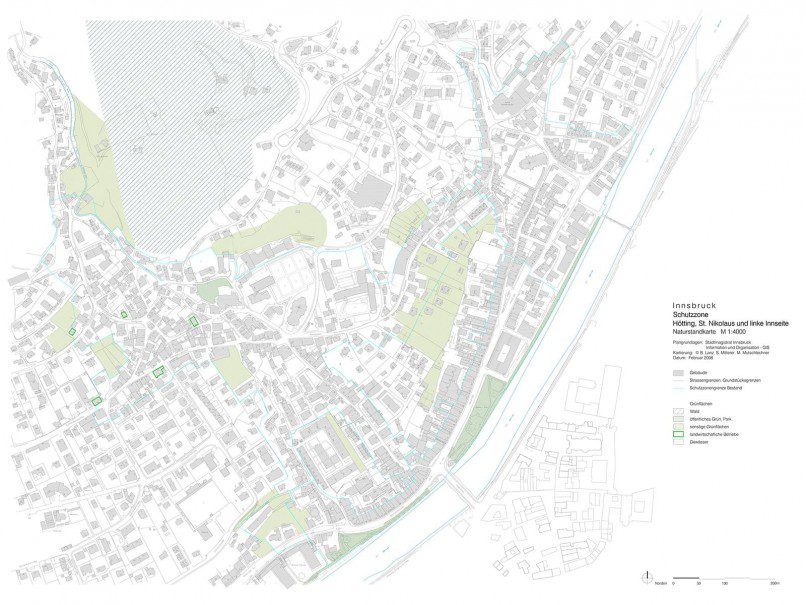 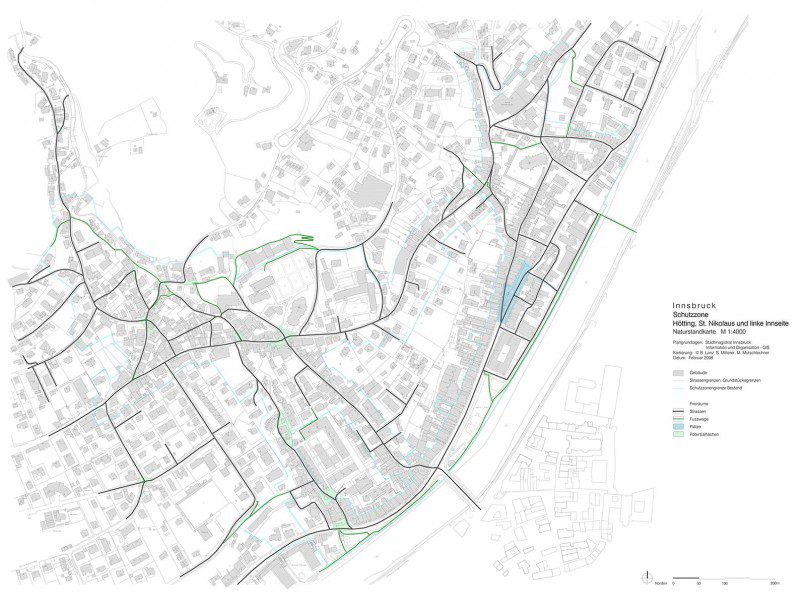 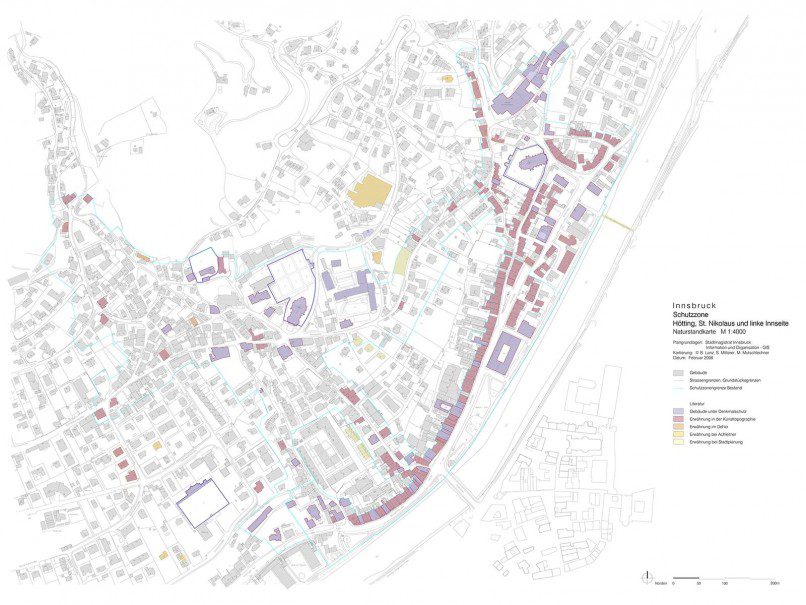 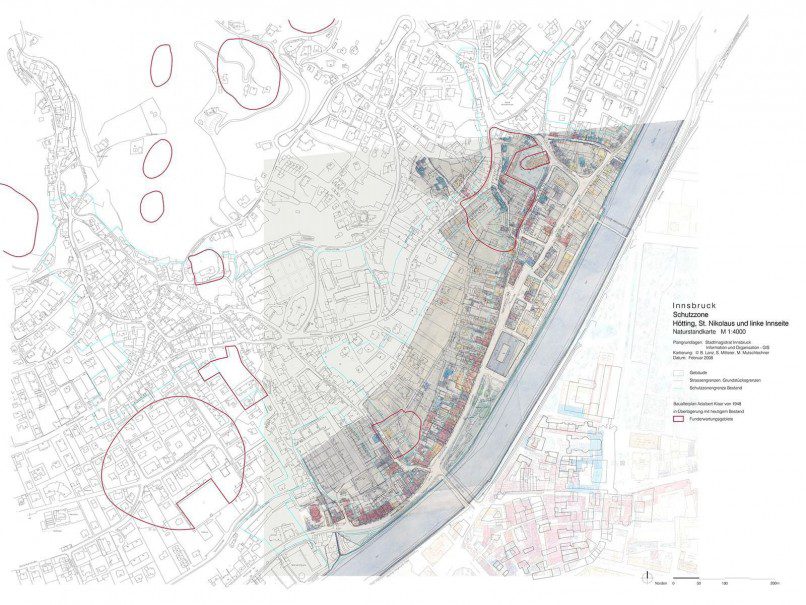 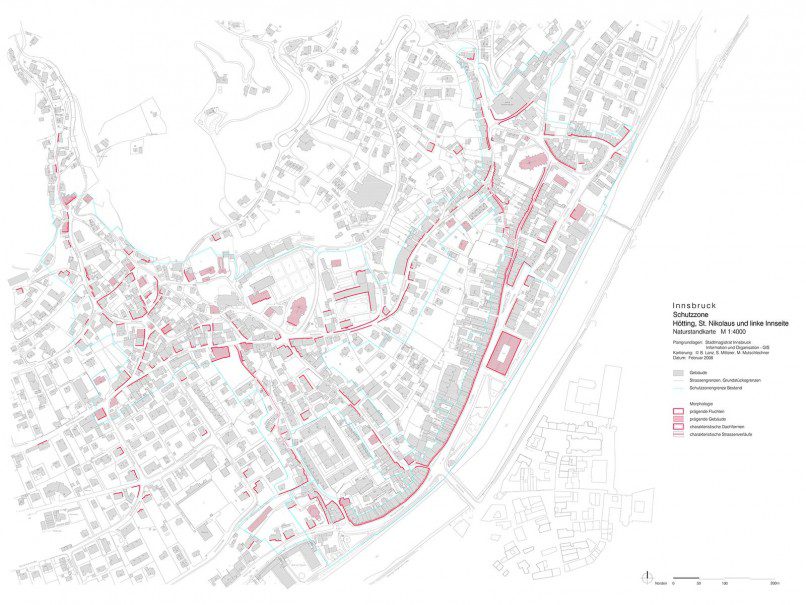 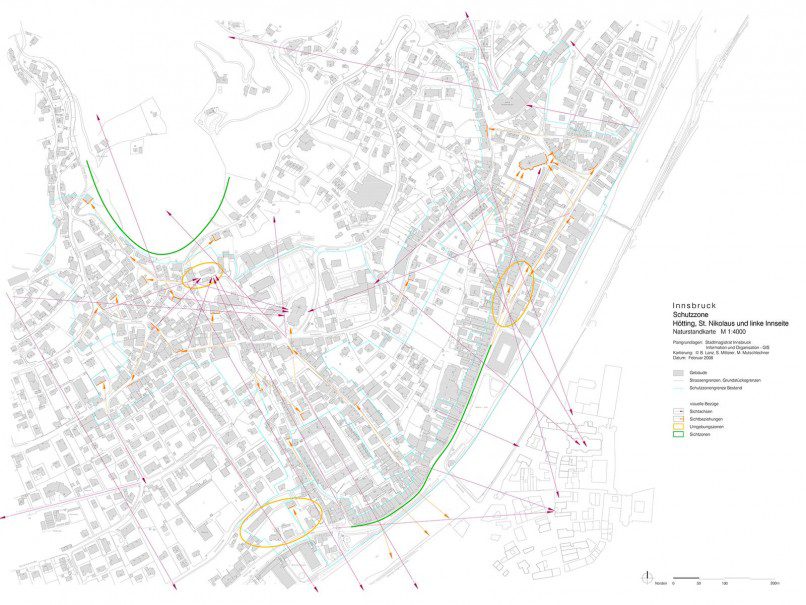 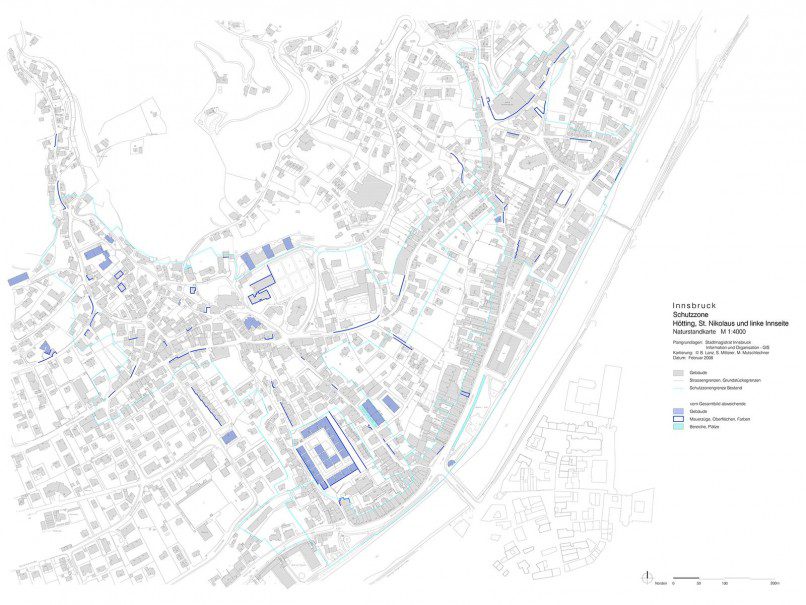 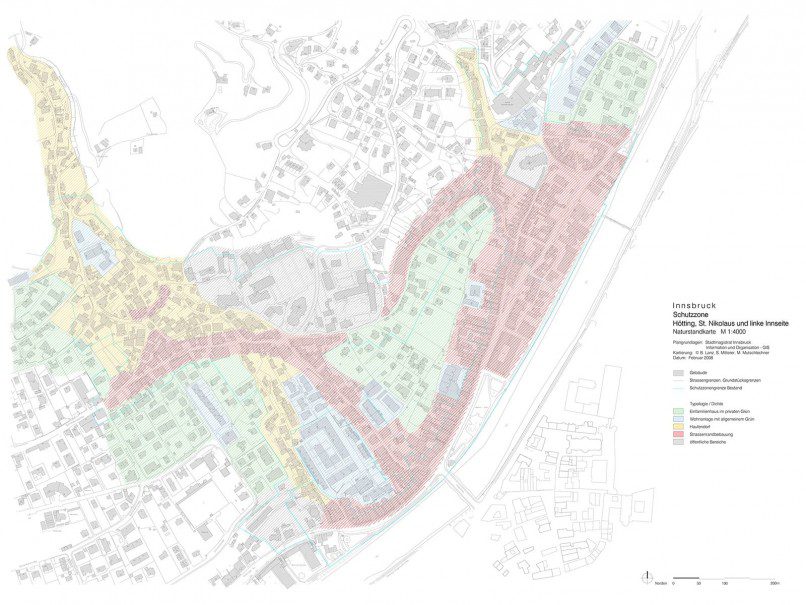 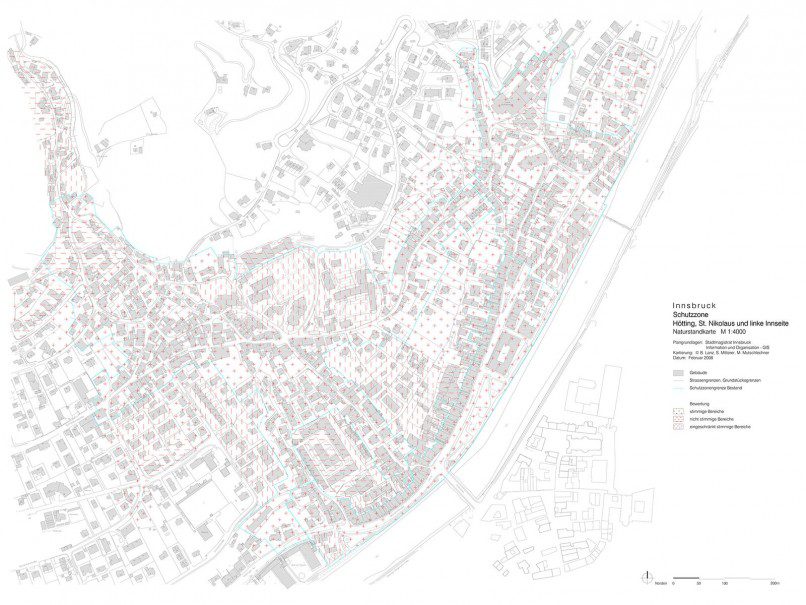 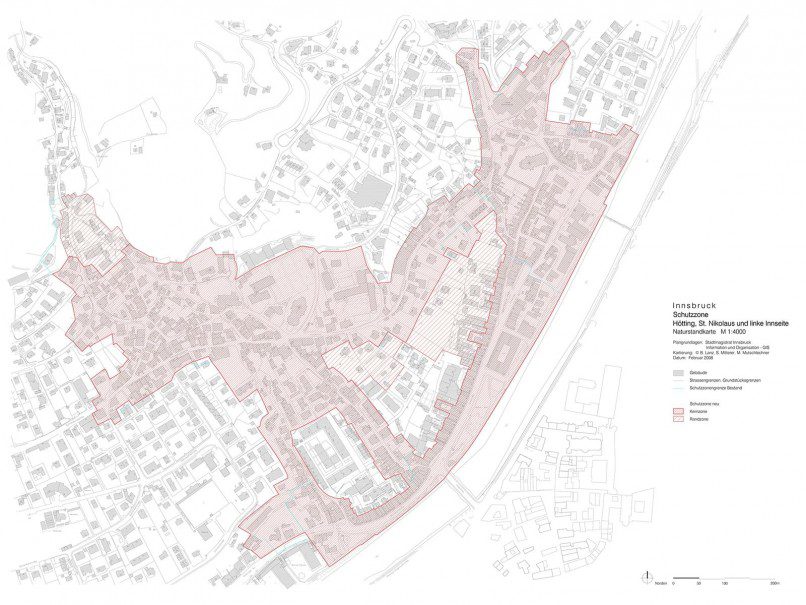